Our sherry vinegar is produced in the Spanish province of Cadiz, in the "sherry triangle" between the city of Jerez de la Frontera and the towns of Sanlucar de Barrameda and El Puerto de Santa Maria. It is aged in American oak barrels using the traditional ‘solera’ method for a minimum period of 2 years where it develops its pale-golden colour, strong, nutty and sweetish flavour and complex aroma. Wine sherry vinegar is commonly used as a marinade with cooked vegetables, or as a dressing on rice, salads, meat and fish.

CH0005
£4.95
Made with free range Manchego sheep milk from Manchega (a breed of sheep), this Spanish cheese is traditionally aged for 10 months; it is then coated in olive oil and aged an additional 2 months. By combining premium cheese and excellent quality extra virgin olive oil, this product is a delicacy, ready to be enjoyed. It is a little oily in texture with a...
View

SP0007
£3.99
These saffron stigmas come directly from Spain, which is well known for being one of the best quality saffron in the world. Saffron, also called “Red Gold”, is a delicate and important spice in the cuisine world enhancing any dish with sweet metallic honey flavours, giving the foods beautifully luminous yellow-orange colours. In Spain saffron is a key...

AP0028
£2.65
One of the most popular Spanish pintxos, traditional in Northern Spain and especially popular in the Basque country and Navarre, now in a jar, ready to eat! Banderilla is a small snack, typically eaten in bars, containing a gherkin, an olive, a cocktail onion, a small piece of bell pepper and one of chilli pepper pickled in vinegar. Enjoy them with a cold...

ME0027
£15.99
Our Hand Carved Iberico Ham comes from black Iberian pigs, fed on a diet of high-quality grain which produces a rich, dark meat with a deep, exceptional flavour thanks to the 36 months curing period in natural dryers, which are located in Guijuelo, Salamanca province. It is well known that the best way to enjoy Spanish ham is when is finely hand-carved,... 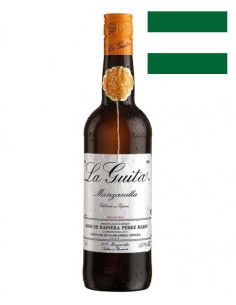 DR0039
£7.99
After the harvest and after a slight pressing, the must ferments in stainless steel deposits at a controlled temperature. Once the wine is selected (it must be clean on the nose, pale and light), it is fortified up to 15% vol. and it enters the 'criaderas' and 'soleras' system, going through a biological ageing with the cap of yeast (velo de flor) in...

SC0001
£5.30
Our Bomba rice is grown in the heart of the famous Albufera natural park in Sollana, Valencia, renowned as one of the best areas in Spain for rice cultivation. This rice increases significantly in size, upon cooking, absorbing more flavours and aromas of the broth in comparison to other rice types. It also remains very firm-grained during cooking, making...

FI0004
£3.99
These Boquerones al Ajillo, also known as white anchovies in vinegar, have a superb flavour, which is the result of the careful selection of the best anchovies, naturally sourced to maintain their original qualities. Our Boquerones al Ajillo are marinated in a traditional style – a mix of garlic, parsley, salt and olive oil, which give them an exquisite...
View

SC0009
£3.99
The Pardina Lentils are perfect for your stews and salads. After a good rinse, boil them for 30mins or so until their skin becomes soft. They are a great source of fibres and proteins which makes them suitable for vegans and vegetarians. PRODUCT FEATURES Lentejas, Dried Pardina Lentils Soft skin, delicate, soft texture From Cadiz, Andalucia 1kg,...
View

AP0003
£2.65
Our Manzanilla pitted green olives filled with Anchovy, combine the best of Spain’s land and sea. Slightly salty, with a mild fishy flavour, they are loved even by those who are suspicious of anchovies. They are best enjoyed when chilled and usually served as a tapa along with a beer or a glass of wine. PRODUCT FEATURES Green Manzanilla Olives...
Tap to zoom

Save products on your wishlist to buy them later or share with your friends.

No account? Create one here
Product added to wishlist